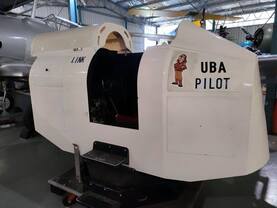 Click on image for larger version
American Edwin Link, worked at the family business Link Piano and Organ Company, and wanted to fly, but the cost was prohibitive for him. In the mid 1920s he joined a group of barnstormers who taught him to fly following which he went barnstorming with them. Concerned with the cost of flight training he started experimenting to find a way of of simulating basic flight characteristics.

By utilising some organ and piano parts he came up with a device which simulated the movement and sensations of flight which he called the “Link Pilot maker”.

After initially exhibiting no interest in the device, but after Link gave them a demonstration of blind flying in 1934, the Military saw the advantages of a low cost instrument flight trainer.

During WW2, the Link Trainer became standard equipment in flight training schools in the US and other allied countries, and 10,000 plus units were produced.

The RAAF operated 161 of these between 1938 and 1957 when they came up for disposal to the aviation industry and other interested parties. The Ansett machines were acquired prior to being scrapped and delivered to our Museum in 2019.
back