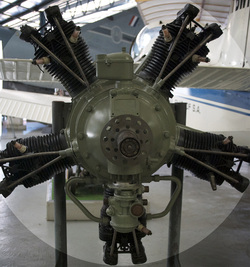 Click on image for larger version
Image © Ewan McArthur 2014
The Armstrong Siddeley Genet is a small 5-cylinder air-cooled 80 horsepower radial engine, and is a small and early product of the British Armstrong Siddeley who produced a successful range of low and mid power radial engines prior to World War II including the 5 cylinder Genet in 88 and 110HP versions, the 5 cylinder 165HP Mongoose, the 7 cylinder 235HP Lynx and Cheetah Engines, and the double row Leopard, Jaguar and Panther.

The Armstrong Siddeley company was formed in 1919 and was a British manufacturer of luxury cars and later, aircraft engines. in 1935 J D Siddeley was bought out by the Hawker Aircraft Company to form Hawker Siddeley and in 1960 the aircraft engine division was merged with Bristol Aero Engines to form Bristol Siddeley, which was taken over by Rolls Royce in 1966.


The Genet was designed by Armstrong Siddeley in 1926 for light training and sporting aircraft, the engine quickly built up a good reputation for reliability.

It was used in these British aircraft:

In 1934 Captain Bremer piloted his Genet-powered Junkers Junior in a 22-country around-the- world flight, with the exception of the Atlantic and Pacific Ocean crossings, when it was transported by ship.

The Genet design led to larger 7 cylinder radial engines including the Cheetah series that saw extensive service in Australia in over 1000 Avro Anson's and nearly 400 Airspeed Oxford twin engined trainers during WW2.