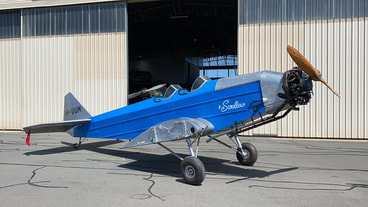 Click on image for larger version
The BA Swallow was a licenced built version of the Klemm Swallow by the British Klemm Aeroplane Company (later known as the British Aircraft Manufacturing Company) from 1933 to 1938, with a total of 135 being built.

The Klemm Leichtflugzeugbau GmbH (Klemm Light Aircraft Company), was founded in 1926 by Dr. Hanns Klemm, who had previously worked for both Zeppelin and the Daimler Aircraft Company.

Klemm created a squared off fuselage in his first design, the 1919 Daimler L.15, and produced 100 of these as L.20 aircraft from his own company, and in 1928 Freiherr Friedrich-Karl von Koenig-Warthausen made a solo flight to Moscow in a Klemm L.20, and continued on to circumnavigate the world.

The Klemm L.25 Swallow first flew in 1927 and was developed from the L.20. Over 600 were built with licences issued for manufacture in the USA and Britain, and was later known as the KL.25.

In 1931 Elly Beinhorn became only the second woman to fly from Europe to Australia, winning the Hindenburg Cup flying a Klemm KL.25 equipped with an Argus engine.

The Klemm Aircraft Company went on to build cabin monoplanes in the 1930's and wartime trainers during WW2 before being taken over by Bolkow in April 1959.

The British dealer for the L.25, Major Stephen, set up the British Klemm Aeroplane Company to produce the L.25 under licence. The prototype of the B.K. Swallow first flew in November 1933, and production aircraft were available with either the 75 HP Salmson 9 or 85 HP Pobjoy Cataract radial engines. It differed from the German original due to its more powerful engines and and some structural improvements required by British authorities, the most notable being the external fuselage stringers. A total of 28 aircraft were made.

In 1935 a revised version was introduced with the squared off wingtips, rudder and tailplane and revised flat fuselage top decking. The company changed its name at this time to the British Aircraft Manufacturing Company, and the revised version of the aircraft was known as the BA Swallow II.

BA Swallow II aircraft were powered by the Pobjoy Cataract radial or the Cirrus Minor 4 cylinder inline engine, and a total of 107 Swallow II were built with production continuing until 1938.

The Swallow, which proved robust and safe, was popular in service. The majority were sold to private owners or flying schools within the United Kingdom. On the outbreak of the Second World War, many were requisitioned by the Military, most of them being issued to the Air Training Corps for use as instructional airframes.

The Museum's BA Swallow II, VH-UUM, was imported into Australia in 1935 by R.H.F. Hickson of Sydney. In 1939 it was sold to J. Finch of Wiluna WA, and sold again in 1943 to future mining magnate Lang Hancock of Mulga Downs, Roebourne WA.

Hancock sold the aircraft in 1957 and VH-UUM passed through four more owners until being donated to the museum by noted vintage aircraft enthusiast Bob Burnett-Reid in 1967.

As one of the earliest aircraft in the collection it has been in undercover storage throughout and is now under airworthy restoration under the direction of Museum Life Member Nelson Wilson.

Today this BA Swallow is one of two examples surviving in Australia, while four airworthy survivors exist in the UK.