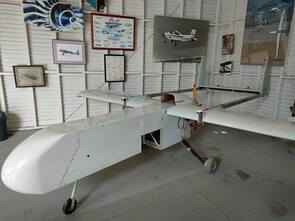 Click on image for larger version
The Kingfisher II unmanned aerial vehicle was designed in Australia as a low cost, easy to operate surveillance drone by BAE Systems Australia.  The aircraft was capable of remaining airborne for 15 hours, either remotely controlled from a ground station, or as an autonomous vehicle directed by a computer flight plan, and could also be filled with a high resolution camera.

Only two prototypes were built, but  never used for their intended purpose. Instead they were used to test the company's ground control station and Imagery Collection and Exploitation (ICE) sensor payloads.

In 2015, at the conclusion of the trials, BAE Systems Australia donated one of the Kingfisher II UAV's to the Museum.
back
© 2018 Australian Aircraft Restoration Group. All Rights Reserved.