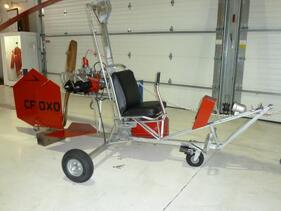 Click on image for larger version
An autogyro is a lifting body that is powered by a free spinning rotor that turns because of the forward motion of the body causing the passage of air through the rotor from below, the resultant downward displacement of air gives lift to the body, as distinct from the helicopter rotor which is driven through the air by engine power. An engine driven propellor, either tractor or pusher provides forward motion to the body. This in turn provides forward speed to create airflow which is necessary to spin the rotor and enable the body to take off, and then to maintain airflow through the rotor to sustain its speed during the ensuing flight.

The Bensen Gyrocopter is a small single seat autogyro developed in the USA in the 1950s. It was first designed as an un-powered rotor kite, but was later refined into a powered version which proved to be extremely popular, and although production ceased in 1987, plans for home builders are still available.

'The basic design is one of a simple frame of metal tubing with a front to rear spine which mounts a steerable nose wheel, a seat, an engine , and a vertical stabilizer. Main wheels are mounted on an axle. The design uses a “pusher” engine/propellor combination for simplicity and pilot visibility. Engines such as McCulloch drone, Rotax marine or Subaru car engines have been used.
​
The two blade rotor is mounted on top of a vertical mast and is controlled by a control stick in pitch by fore and aft movement or in roll by side to side movement that tilts the rotor disc accordingly. Rudder pedals provide yaw control through the vertical stabilizer, and a throttle controls engine power output.
back