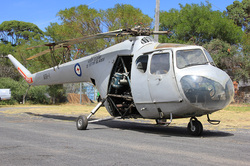 Click on image for larger version
Image © Jason Burgess 2014
The Bristol Type 171 Sycamore was the first British-designed helicopter to fly and serve with the RAF. Created by the Bristol Aeroplane Company, it was used for search and rescue and anti-submarine warfare.

The Sycamore was the second helicopter type to be used by the Australian Defence Force, when seven were delivered to the RAN and served in the Fleet Air Arm between 1953 and 1965. These naval helicopters retained their British serials throughout their Australian service, although the serial N5 prefix was issued.

The Museum's example served the RAAF between 1951 and 1965. It was one of a pair, with the numbers A91-1 and A91-2 respectively, that operated almost exclusively at the Woomera Rocket Range until A91-2 (a Mk 4) was scrapped in 1961.  A91-1 (a civilian Mk 3) flew on until sold to a civilian operator in March 1965. The Sycamore was registered VH-GVR until it arrived at the Museum