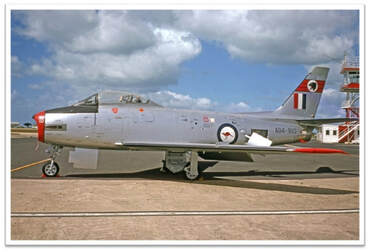 Following the failure of the English Hawker P1081 to meet both RAAF and RAF requirements, Lawrence Wackett turned to the USA in search of a design for local production, and once again selected a North American Aviation design to be built by CAC.

Although the F86 Sabre was already acknowledged as a successful aircraft, Wackett proposed to Rolls Royce that the Sabre be fitted with the Avon, with 50% greater thrust than the original engine, which was presently being tooled up for production by CAC for use in the Australian built GAF Canberra.

Other modifications included replacement of the six 50 calibre machine guns with two 30mm Aden cannons, and although the resulting aircraft still has the classic looks of the F86, the fuselage required 60% of the fuselage structure to be redesigned. Not obvious to the eye is the 25% increase in the air intake to meet the different needs of the Avon engine.

Interestingly, the Avon Sabre became the fourth Australian made aircraft to service with overseas forces, following the Wackett Trainer, Tiger Moth and Mosquito, when the Australian government presented operational Sabres to the air forces of neighbouring Indonesia and Malaysia.

The first of 112 CA-27 Sabres were delivered to the RAAF in 1954, and the last one in 1961. During this time, they served with Squadrons No's 3, 77 and 79, and were involved in the latter stages of the Malayan Emergency, and the Indonesian Confrontation.

The RAAF Sabres were retired in 1971, and 20 of the aircraft were donated to Indonesia.