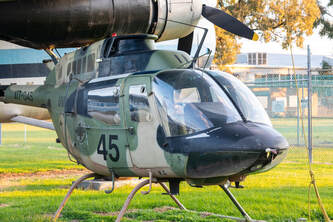 Click on image for larger version
The Australian Defence Force (ADF) chose to militarised Bell 206 helicopter named "Kiowa", to fill its requirement for a Light Observational Helicopter, and the Commonwealth Aircraft Corporation (CAC) was to produce them in Australia under license at their works at Fishermen's Bend Melbourne.