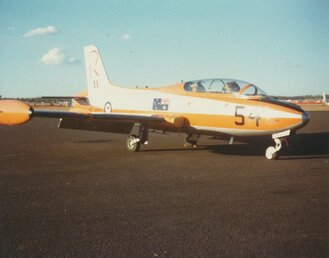 Click on image for larger version
A replacement for the RAAF's Winjeel and Vampire training aircraft with an all through jet trainer was being sought in the 1960s. Evaluation of several jet training machines resulted in the Italian Macchi MB236H being selected.

An initial order was for 75 aircraft later increased to 87, with a further 10 for the RAN. Manufacture was to be by the CAC and it was to firstly assemble 20 machines from components of predominantly Italian manufacture, and the remainder being manufactured and assembled with components of high local content. CAC was also to produce the aircraft's power plant, the Rolls Royce Viper turbo jet. The designation of CA-30 was assigned by the CAC, with RAAF serial series A7.

The RAAF's first Macchi first flew in Italy in April 1967 and was then shipped to Australia and handed over to the RAAF in October 1968. Australian production then continued until September 1972 when the last aircraft was delivered.
The philosophy of all through jet training only lasted for a couple of courses before reverting back to piston primary, and jet advanced training.

The PC-9 superceded the Macchi as the advanced trainer, and remaining Macchis went into the lead in fighter role with Nos 25, 76 and 79 Squadrons until they in turn were superceded by the BAE Hawk 127 in 2000.
Not to be forgotten, Macchis were the machinery part of the RAAF formation team from 1970 until 1989.

The fuselage of the Museum's Macchi, A7-054, is currently on loan to the Benalla Air Mueum.
back
© 2018 Australian Aircraft Restoration Group. All Rights Reserved.