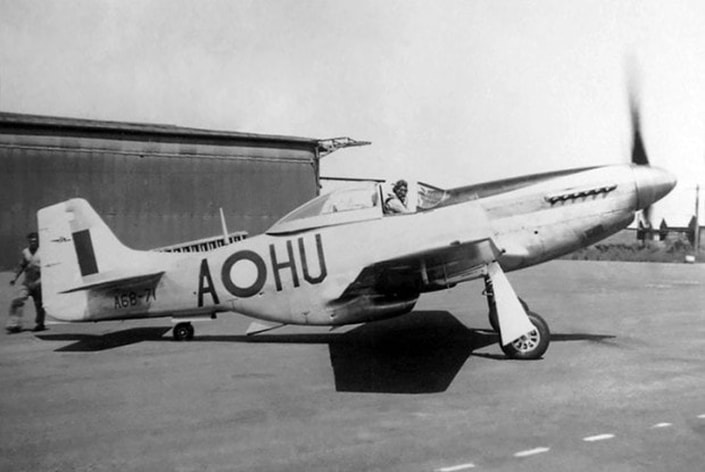 Click on image for larger version
The Museum's CA17 Mustang A68-71 was assembled by the CAC in early 1946 from parts supplied by North American Aviation, and powered by a USA overhauled Packard Merlin engine. It's first flight was at Fishermans Bend in April 1946, after which it went on charge to the RAAF as A68-71 and was delivered to No. 1 AD at Laverton Victoria. One month later it was transferred to Deniliquin for storage before being transferred firstly to No. 78 Squadron then No 25 Squadron at Pierce WA where it was damaged in a landing accident and subsequently converted to an Instructional Airframe, remaining at Pierce.

A68-71 was struck off RAAF charge in October 1952 and issued to Perth Technical College, and later being used as an apprentice training aid stored in the open, where it developed serious corrosion. In 1973 it was donated to the Air Force Association (AFA (WA), who transported it to under cover storage before again being moved to the AFA's Bull Creek estate where it was dismantled and stored.

In June 1984 it was acquired by AFA Member Derek McPhail who took on a long term restoration to airworthiness condition project at his workshop in Nedlands Perth. Subsequently moved to McPhail's new home in Gisborne Victoria in December 2001 where restoration work continued, and it was registered VH-VID.
​
It was offered for sale as an airworthy project within Australia without success, but McPhail was determined that it remain in Australia. It was finally sold to our Museum in early July 2016 and moved from Gisborne to Moorabbin later that month.