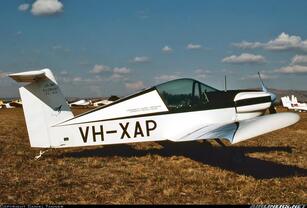 Click on image for larger version
The Pazmany PL-4 is a single seat sport aircraft designed and developed in the USA by the Pazmany Aircraft Company.
A low wing monoplane with an enclosed cockpit, fixed tail wheel undercarriage and “T” tail, to facilitate wing folding, and powered by a 60hp converted Volkswagen engine.

It was marketed for home building from plans of which some 680 sets had been sold by 1985. The aircraft appeared at the 1972 EAA Fly-In at Oshkosh where it won the “Outstanding New Design” and “Outstanding Contribution to Low Cost Flying” awards.
​
The Museum's Pazmany PL-4 VH-XAP was the last aircraft built at the CAC when their apprentices undertook the project of building it. It bears the CAC logo of CAC 36 and it was acquired in 2016.