ANNOUNCEMENT : Click here to view the news about the launch of the Beaufort A9-13 Restoration Project 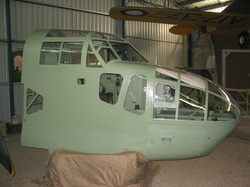 Click on image for larger version
Beaufort cockpit on display
Restored by Ralph Cusack
The Bristol Beaufort was an enlarged development of the 1936 Bristol Blenheim light bomber, and was developed initially as a 3 seat torpedo bomber to replace the outdated Vickers Vildebeest, but later revised as a four seat general purpose / reconnaissance bomber to replace the Avro Anson.

In March 1939, the British and Australian Governments announced that the twin engined Bristol Beaufort would be built for both the RAF and RAAF, and the 8th production Bristol Beaufort MK I, L4448 was shipped to Australia to act as a pattern aircraft (template for production) and was later fitted with P&W 1830 engines..

With the outbreak of war in Europe in 1939,  Australia commenced major industrial works.  The country's first mass produced aircraft, the Wirraway, was already being built at Port Melbourne by CAC, and the Department of Aircraft Production (DAP) established the Beaufort Division on adjoining land. At that time, the manufacturing of such a modern twin-engined high performance aircraft was a major challenge to the Australian industry. Major industrial companies such as BHP and GMH contributed to the war effort with BHP’s Chairman Essington Lewis responsible for the DAP.

The 39,000 component parts for the Beaufort were sub-contracted out to over 600 firms, and seven factories handled the major sub-assemblies which were then fed into the main assembly plants. The Beaufort program made significant use of existing workforce and skills in the railway workshops at Newport Victoria , SA and NSW, as well as training new employees on the production lines. A  major impact on the nation’s society and future development, was the introduction and training of women on the production line workforce at the main assembly plants, of the eventual 8,500 DAP employees, more than one-third were women.

The first type 152 Bristol Beaufort - RAF L4441 - flew on 15 October 1938 and a total of 1014 Beaufort MK I aircraft were manufactured in the UK along with 1,429 Beaufort MK II aircraft fitted with American built Pratt and Whitney R1830 twin row wasps based on the Australian design. Production in the UK ceased in early 1944.

In Australia, the first DAP-produced Beaufort flew in August 1941, and was one of a batch of 180 ordered by the RAF for use in the Far East, but when Japan entered the war in December 1941, it was agreed that these Beauforts would be taken over by the RAAF for the defence of Australia.

The first 50 examples built in Australia were designated as Beaufort MK V aircraft, differing from the Bristol Beaufort MK I built in the UK due to the installation of Australian built, American designed Pratt and Whitney engines, but with the Bristol B4 MK1E turret, and an aft firing cupola gun fitted under the nose. The remainder of the first 180 examples ordered for the RAF were finished as MK VI, VII and VA models, with various differences to the original MK V aircraft such as an extended fin, addition of two guns fitted in gimbals in the nose, removal of the under nose cupola gun and variations in propellor and engine fitouts.

The definitive Australian MK VIII Beaufort saw 520 aircraft built numbered from A9-181 to A9-700, and fitted with a new Bristol B1 MK V dorsal turret and later the B1 MK VE. They also had a significantly different rear fuselage shape to accomodate the higher mounting of the later turrets.

When production ceased in August 1944, a total of 700 Beauforts had been built. These aircraft served with numerous squadrons including Nos 1, 2, 6, 7, 8, 13, 14, 15, 32, and 100 and established an impressive operational record in operations against Japanese forces in New Guinea. They attacked shipping in all areas of the South-West Pacific and sank cruisers, destroyers and submarines, as well as bombing and strafing inland supply dumps and troops. They were also used for routine convoy protection and coastal reconnaissance.

Most of the Beauforts were phased out of service soon after the war, and today only three remain in various condition in Australia, with one being rebuilt to fly in Queensland and another in storage with the AWM, while another two exist in overseas collections.

The construction of 700 DAP Beauforts and 755 CAC Wirraways are the crowning achievements of the local production of aircraft for the defence of Australia in WW2.

The Museum's DAP Beaufort A9-13 was the 13th locally built Australian MK V Beaufort Bomber, with the first 20 being assembled from imported UK parts, but fitted with Australian built Pratt and Whitney 1830 Twin Row Wasp engines. A9-13 was originally built to an RAF order of 180 aircraft and was delivered as RAF serial number T9552 in January 1942 and was one of 20 Australian Beauforts delivered to 100 Squadron RAF which operated at Richmond NSW.

The first 58 aircraft were constructed with British serial numbers for delivery to the RAF for use by RAF 100 Torpedo Squadron at Singapore, however only six aircraft ever left Australia for Singapore, with one crashing on the way, and the remaining five hurriedly returned to Australia following the Japanese invasion.

T9552 joined Q Flight of the RAF 100 Torpedo Squadron at Point Cook on 21 January 1942 as the 8th aircraft on strength, and being allocated the RAF squadron codes NK-B. By the end of January the squadron relocated to Richmond RAAF Base in NSW.

On 9th of April T9552 was involved in a five hour escort duty of a large RAN Convoy, and in late April 1942  was transferred to Number 1 Operational Training Unit at Nhill.

All former RAF Beuaforts were transferred to the RAAF in May 1942 following the fall of Singapore, along with all other Australian RAF Beauforts and a new RAAF 100 Squadron was formed to operate Beauforts, adopting the number and many aircrew from the RAF 100 Squadron attachment already in Australia along with those who escaped from Singapore.

Renumbered as RAAF Beaufort A9-13, in June 1942 it moved to Bairnsdale in Victoria for use in the training of Beaufort aircrew before allocation to operational squadrons and served with 1 OTU until December 1942 when it suffered a forced landing due to engine failure

A9-13 continued to serve with 1 OTU until January 1944 when it was transferred to 1 Aircraft Deport (1AD) at Laverton from where it was issued to 8 Communications Unit serve in New Guinea as a replacement for A9-79 in a communications and support role.

While serving with 8CU in New Guinea A9-13 was used to calibrate ground based airfield and early warning radar installations, as well as general communications and "milk" runs.

In 1945 during a flight to deliver fruit and vegetables to the 100 Squadron base at Tadji airfield in Northern PNG, A9-13 suffered a forced landing and was converted to components.

In 1974 the remains of A9-13, along with twenty other wartime wrecks including 4 Beauforts, 7 P-39 Airacobras, 6 P-40 Kittyhawks and 1 A-20 Boston were recovered for American collector Dave Tallichet by Monty Armstrong and Charles Darby. A9-13 was exported to New Zealand and later brought to Australia by Monty Armstrong where it was displayed for a period at Point Cook and later Essendon Airport where some early restoration was undertaken, before being moved to Queensland for display at the Museum of Australian Army Flying at Oakey. When recovered, the fuselage of A9-13 still carried the faint trace of yellow surrounds to its tri colour RAF roundel along with the remains of the NK-B squadron codes from its brief service with the RAF 100 Squadron "Q Flight" in Australia in early 1942.

A9-210 flew with RAAF 100 squadron as QH-D on many operational combat missions from Tadji in New Guinea before suffering a collapsed undercarriage on landing on 13 July 1944 and being cannibalised for parts. The un-restored cockpit of A9-210 still carries remnants of nose art on either side, consisting of a torpedo with eyes, mouth and teeth, biting the pants of a Japanese soldier. 100 Squadron Beauforts normally only carried nose art on the port side and these remnants are possibly the only surviving examples now in existence and will need to be preserved as part of the future planning of the Beaufort project.