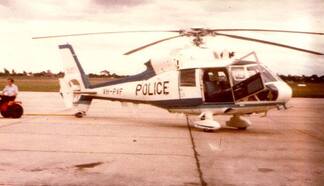 Click on image for larger version
The Victoria Police Air Wing came into existence in 1975 utilising fixed wing aircraft. In 1977 the Air Wing conducted an evaluation trial flying regular helicopter patrols which in 1978 led to the decision to purchase a helicopter which resulted in the arrival at the Air Wing of the Aerospatiale AS365C1 Dauphin 2 registered VH-PVF, becoming the first helicopter to be owned and operated by the Victoria Police.

The AS365C1 Dauphin 2 is a medium weight, multi purpose twin engine development of the single engine SA 360 Dauphin The first flight of the prototype AS 365 Dauphin 2, took place in January 1975, and demonstrated a level speed of 170kts and later set several speed records. The type received French Certification in July 1978. It is powered by twin 630shp Turbomeca Arriel turboshaft engines driving a four blade Starflex main rotor and an eight blade Fenestron tail rotor that together produce low noise and vibration values. Production commenced in December 1978 and proceeded until the C1 variant was superceded by the “N” variant in 1982.

VH-PVF was in commission with the Victoria Police from 1979 until 2001 during which time it was engaged in regular police patrol, air ambulance, search and rescue and transport operations. It performed the dangerous rescues of yacht crews in the ill fated 1998 Sydney- Hobart yacht race and the equally demanding evacuation of stranded people during the 1983 Ash Wednesday bush fires.

Following de-commissioning the machine disappeared into private hands until it was later discovered, purely by accident, by an ex police member driving past a country Victoria property. It was purchased by Mark Whorlow, another ex Air Wing officer, who put it in storage and created a fund for the restoration to display standard and subsequent donation to the Museum . Finances being finalised, ownership of the machine was formerly transferred to the Museum on September 9th 2021, and was duly delivered to the site by Board Members Peter Anderson and Wayne Denereaz on October 8th 2021.