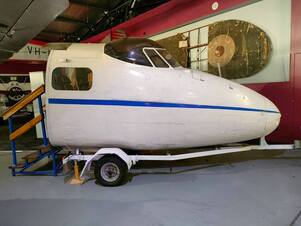 Click on image for larger version
The de  Havilland DH104 Dove was a British twin engine short haul airliner developed and manufactured by de Havilland. The design was the concept for a replacement mainly of the pre war de Havilland Dragon Rapide aircraft.

The Dove which first flew in September 1945 is considered to be one of Britain's most successful post war civil designs that had qualities that enhanced it's desirability from an operator's point of view such as load carrying capacity, good one engine out handling and performance plus maintainability features such as component design to allow interchangeability and ease of removal or replacement, particularly the quick change engine mounts.

When production ceased in 1967, a total 544 Doves consisting of 9 civil variants and 4 military, had been sold to scheduled, charter and military operators worldwide.

The Museum's Dove VH-CLD Cockpit is currently on display inside the main hangar.