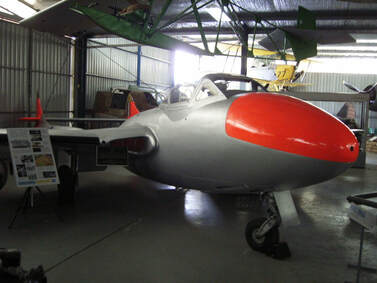 Click on image for larger version
The Trainer version of the DH115 Vampire was adapted from the Night Fighter variant which in turn was an adaptation of the single seat Vampire variant with the incorporation of a de Havilland Mosquito cockpit section, in both cases fitted with the appropriate equipment relevant to the role

De Havilland Australia produced 110 of the trainers, designated T33 and T35 consisting of 35 T33s for the RAAF, delivered in 1952, 5 T35s, for the RAN delivered in 1954, plus 1 extra for the RAN to replace a write off and delivered in the updated T34A standard with ejector seats and modified canopy, which conformed to the RAAFs later 69 T35s. The T33 and T34 versions were allocated the A79-800 serial range and the later T35, the A79-600 range. The aircraft were powered by the 3,500 lb thrust Rolls Royce Goblin 35 turbojet.