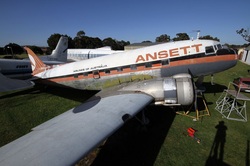 Click on image for larger version
The DC-3 is the world’s most successful commercial aircraft with 10,928 examples being built.

Developed from the successful DC-2, the DC-3 had its origins in a request made in 1934 from American Airlines for a luxury sleeper transport based on an enlarged version of the DC-2 to replace its aging 1920's Curtiss Condor Biplanes. Douglas responded in May 1935 with a proposal for the Douglas Sleeper Transport (DST), providing for eight sleeper berths, while a day version, the DC-3 had a standard accommodation of 21 passengers.

The DC-3 was intended to have 85% similarity with the DC-2, although in the end the DC-3 was quite different and only able to utilise about 10% of the DC-2's components. Differences included a rounded fuselage to create a 66cm wider floor space, 76cm longer fuselage, increased wing span, more powerful 920 HP Wright Cyclone single row 1820 engines, and enlarged fin and rudder to overcome handling problems experienced in the DC-2.   The prototype first flew in December 1935 and only 50 DST aircraft entered service before the DC-3 in standard airliner form caused a revolution in the industry, with a DC-3 costing little more to operate than a DC-2, but offering a 50% increase in payload from 14 to 21 seats, it quickly caused the retirement of most other types such as the 10 seat Boeing 247, then still in United Airlines service.

Orders for the DC-3 rapidly increased from within the USA and from export customers, with Fokker assembling and selling 63 to European operators including KLM, Swissair, Sabena and Air France.  Australia's first DC-3 arrived in September 1937 for service with Australian National Airways, and was joined by a further three by the end of 1938.

By December 1941 when the USA entered the war, 500 DC-3's had been built and a further 369 were on order.  The USAAF took control of 10% of operational airline aircraft, and requisitioned new airline aircraft direct from the production line, with those aircraft being designated C-48, C-49, C-50, C-52 dependant on the source and engine configuration.

The C-47 had large cargo doors, strengthened metal floor and tie down points, Pratt and Whitney twin row 1830 engines, stronger landing gear and a glider towing cleat,  and first flew in January 1942, with an eventual 9,500 being built. C-47
s were also known as Dakota's and served in every allied air force, including the RAAF, which operated 124 lend-lease Dakota's under its A65-xxx number series and recently retired its last examples after 60 years of service.

Many C-47's were converted back to DC-3 passenger airliners following world war two, with former USAAF and RAAF aircraft entering Australian domestic airline service with ANA and TAA, after a refit of seats and passenger doors.

Over 200 different civil registrations were carried by DC-3 aircraft serving with more than 40 operators in Australia post war, with 41 being operated by Ansett-ANA, over 30 flying with TAA, and 5 serving with Qantas.


The Museum's aircraft was originally built by Douglas in July 1941 as a right hand door DC-3 277D with Wright Cyclones, for delivery to American Airlines as NC33657, but was instead requisitioned direct from the production line by the U.S. Military as a C-50 "41-7698".

Along with two other C-50's, it was delivered to the 5th Air Force in Australia in October 1942 for use as a Troop Carrier, and flew with the 21st Troop Carrier Squadron of the 374th Troop Carrier Group, carrying the call sign VHCDJ (not a civil registration).

Following the re-equipment of the 21st TCS with fifty-two new C-47's in early 1943, VH-CDJ, along with another C-50 and three C-53 aircraft, were transferred to the RAAF for service with No.36 Transport Squadron, where it carried the name "Waltzing Matilda".  In 1944 it was transferred to Guinea Airways operating passenger flights under military auspices.

In July 1946, the aircraft was purchased by Australian National Airways, registered as VH-ANH and given the name “Tullana", and as part of their C-47 conversion program, was changed from right to left hand passenger door .  When ANA was taken over by Ansett in 1957 the aircraft remained with the company, flying with Ansett subsidiary Airlines of New South Wales.

On the 27th of August 1972 VH-ANH made it’s last flight to Moorabbin Airport to join the Museum collection, initially being leased to the Museum for $1.00.  The DC-3 has since been donated to the Museum.

This aircraft is the third oldest DC-3 surviving in Australia, and is one of three original factory built civil airliner DC-3's existing in the country, the remainder being converted from, or remaining configured as military transport C-47's, with a number still remaining airworthy for charter and tourist flights..