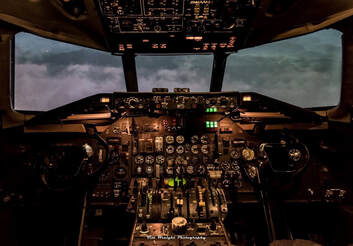 Click on image for larger version
Full flight simulation used for the aircraft type training of flight crews became necessary as aircraft became more sophisticated and technologically advanced, and basically coincided with the introduction of the jet airliner, and high performance military aircraft. Type certification and recurrent training could no longer be carried out on a subject aircraft for technical, proficiency and safety reasons.


The multi computer systems required to make a modern multi hundred tonne aircraft stable and flyable require operating crews to be fully au fait with them, and the effect on the performance and handling characteristics of the aircraft in case of failure of one or more of the systems, and the use of an applicable checklist. Technically, simulated system failures may not be introduced in an aircraft of this type, and also from a safety aspect, it's just not done.


A full flight simulator used for type certification and on going training or proficiency checking of flight crews, must replicate the subject aircraft type flight deck, down to the last screw, switch and control. Deployment of all switches, levers and controls must impart the correct reaction to the machine, and all sounds, including warning and cautionary tones associated with all phases of flight, must be true to type.
​
This simulator was operated by TAA/Australian Airlines and was acquired from the Melbourne Museum as a complete operational DC9-30 aircrew trainer. Unfortunately the prior dismantling of it led to the destruction of the wiring to and from the sensing and actuating systems to such an extent that re-erection of the simulator was not feasible. So this is only the cab itself, but one of our volunteers has got the electrics working such that all the lights function, and a video representation of flight can be seen on the screens in front.
back