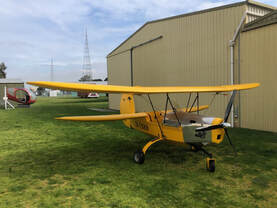 Click on image for larger version
In 1933 and after three years of experimentation, Frenchman Henri Mignet produced and demonstrated his Flying Flea HM.14, which was a simple to build and simple to fly home built ultra light aircraft, powered by a 17hp motor cycle engine.

A biplane of very unconventional design having severely staggered wings, a stubby fuselage and a large rudder. There were no ailerons, tailplane/elevators or rudder pedals in the design, control being exercised by a single control column.

Back and forth movement of the column caused changes to the angle of attack of the front wing, either increasing or decreasing the lift. The rear wing was a fixture. Side to side movement caused yaw and roll movements to be imparted through connections to the rudder.
​
In time and as engine power increased, a design defect became apparent causing the aircraft, in certain circumstances, to enter an unrecoverable and frequently fatal dive. Investigation found the reason causing the nose down pitch was a combination of the close proximity of the front wing trailing edge to the leading edge of the fixed rear wing, and a high angle of attack on the front wing producing a higher velocity downwash that flowed around the rear fixed wing, increasing the lift generated by that surface, producing the nose down pitch.

Natural recovery action of more back stick only worsened the situation. This was subsequently rectified by a re-design of the wing geometry and increasing the distance between the trailing and leading edges of the front and rear wings. This modification and other developments to variants of the original led to the Flying Flea becoming a safe and reliable light aircraft, many of which continue to be built.

The Museum's Flying Flea, HM.293 was designed by Henri Mignet in 1946 as a light aircraft for the French military. The plans were redrawn by Rodolphe Grunberg in1977 and was home built by Philippe Bouillet between 2005 and 2011. It then took its first flight March 12th 2011 at Sunbury Victoria and was flown until 2017 before it was donated to the Museum.