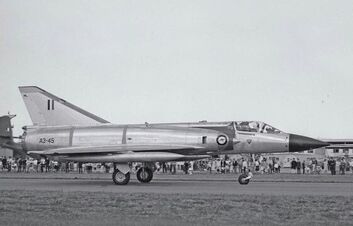 Click on image for larger version
With the CA-27 Sabre coming to the end of its service life,  the Federal Government decided that the RAAF would receive the Dassault Mirage III, the first supersonic fighter aircraft that the RAAF would operate.  It was to be produced in Australia under license, with production shared by the CAC building the main planes, control surfaces and vertical stabiliser, as well as the Atar 9c engine, and GAF making the fuselage and final assembly of each aircraft.

98 aircraft were produced between 1967 and 1979, consisting of the three variants which were : 48 Mirage IIIO (F), the inceptor version and 50 Mirage III(A) the ground attack version. An additional 16 Mirage IIIO (D), dual seat lead in training machines for the type, were imported from France.

The Mirage was retired from RAAF service in 1988. Accidents destroyed 42 aircraft, and of the remainder, 50 were sold to Pakistan.

The Museum's Mirage A3-45 was produced in 1967, and served with Mirage Squadrons No's 3, 77 and 79 and with No. 2 Operational Training Unit (OTU) before being retired from service. It was transferred to what had been GAF at Avalon for storage, from where the Museum acquired it in 1993.
back
© 2018 Australian Aircraft Restoration Group. All Rights Reserved.