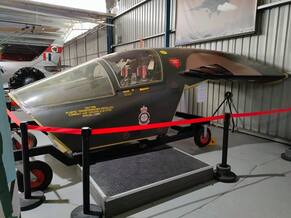 Click on image for larger version
The F-111C aircraft commended service in Australia in 1973 with 24 aircraft. Later, four ex-USAF aircraft were purchased to replace accidental losses. In addition, Australia operated fifteen USAF F-111Cs between 1993 and 22007. A further 10 aircraft were held in storage for spare parts and requirements.

The last RAAF F-111C flight was on December 3rd 2010. After vigorous campaigning by Museums and other interested parties, thirteen of the aircraft and eight Crew Escape Modules have been preserved for distribution between RAAF Bases and Museums.

22 fuselages have been buried in Queensland with wings and other components scrapped, as required by the terms of the original purchase.

The Museum's Crew Escape Module came from aircraft A8-131 and arrived at the Museum on June 28th 2013.