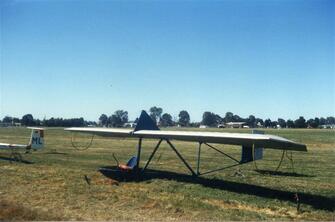 Click on image for larger version
The Heron Primary Glider was discovered in a shed at Upper Beaconsfield,  Victoria in 1943 by 4 young employees of the Commonwealth Aircraft Corporation who were all keen to go gliding, and this discovery gave them the opportunity.

Believed to have been built in the 1920's, it was re-built at RMIT after being found, and the four friends joined the Motorless Flight Group with the intention of flying it.  In July 1945 the Heron Glider made its first flight from a paddock near what is now Moorabbin Airport.

In 1948, the Heron went into storage until  being given to the Geelong Gliding Club in 1955, where it fell into disrepair at Belmont Common. Rescued by the Motorless Flight  Group and stored in Bacchus Marsh until being restored in 1994 it was donated to the Museum in April 1995.
back