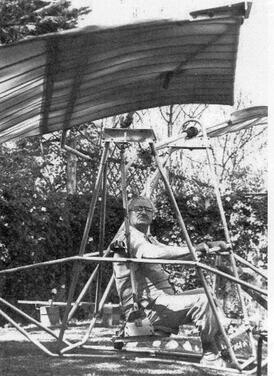 Click on image for larger version
Since people of the world first thought of flight, they looked to birds for inspiration as they saw the flapping of their wings giving them motion. All this is said to have started in 4000 BC when a wooden bird was built and later Icarus tried to emulate a bird by fastening feathers on his arms and attempted to fly, but as the story goes he went too close to the sun and the glue used on the feathers melted and he dropped to his doom.

Leonardo daVinci took up the challenge in the 15th Century AD creating drawings of flying machines with mechanically driven flapping wings because he realised that humans did not possess the strength necessary to propel themselves as Icarus had attempted to do. This then was the genesis of the Ornithopter, a mechanical device that flaps wings as a bird does to become and remain airborne.

Over the ensuing centuries many devices have been invented by eminent persons to enable man to attempt to fly like a bird, utilising his physical strength by either pedalling or actuating the device by pumping with the hands. None of these devices were successful except for a very few, very short “flights”, and the concept was eventually deemed not to be feasible.

It was not until in the early 21st century that human propelled flight did eventuate but using a conventional aircraft design constructed out of very light weight materials, and with the human turning a propellor by pedalling and thus providing forward movement.
​
The Museum has in storage one of the many unsuccessful human powered Ornithopter devices.