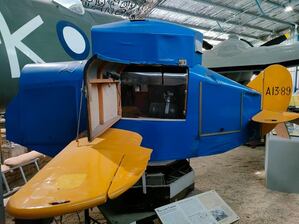 Click on image for larger version
Edwin Link worked in the Family business of the Link Piano and Organ Company in New York, and wanted to fly, but found the cost prohibitive. He joined a group of brainstormers in the mid 1920's who taught him to fly but he was still convinced that the cost of pilot training was too expensive and built a device to replicate the movement and sensations of flight using parts of pianos and organs from the family business. This device was named "Link Pilot Maker", and he started a company - Link Aeronautical Corporation - in 1929 to build and market the trainer.

It was initially sold to amusement parks as an attraction because the military and other flying schools showed no interest in the device, but after demonstrating a blind flight to the military in 1934 it became seen to be a low cost training device, particularly important in the instrument flight role.

During WW2, the Link Trainer became standard equipment in flight training schools in the US and other allied countries, and in excess of 10,000 of the trainers were produced.