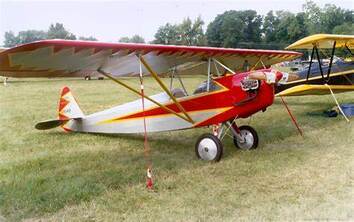 Click on image for larger version
Edward Bayard Heath, a successful US air racer and operator of an aircraft parts business was looking to design a light aircraft being available to the average enthusiast that would reduce the high cost of aviation to them, and also be capable of home building.

In 1926 he designed and built the first version of the Heath Parasol, a small single seat high parasol wing monoplane, powered by a Henderson 4 cylinder motor cycle engine. Later versions could accommodate a variety of engine types and sizes.

Heath died in 1931 in the crash of one of his later designs, but his Parasol has remained popular being economical to build and operate as well as easy to fly. In excess of 1,000 were built from kits or plans. Only some 50 were factory built. At the time Heath Parasols were the lowest priced U.S CAA certified aircraft available. When later the Company ceased production of Parasol kits, the type certificate was sold to the U.S EAA who continued to sell original plans to potential home builders.
Heath is remembered for his contribution to the advance of the home built aircraft industry, and for his introduction of the kit concept of sales to home builders.
​
Several Parasols were built in Australia, the first in 1932, some still exist and at least one was still flying in 1996. The Museum's Parasol is a hybrid machine built from a fuselage donated in 1971, and other acquired components that were held in storage.
​