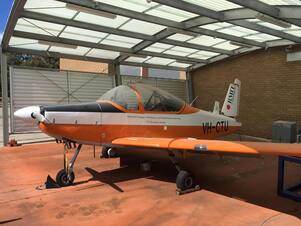 Click on image for larger version
The CT-4 is a two seat low wing all metal piston engined monoplane, fully aerobatic, +6G-3G, with fixed undercarriage, built for basic military aircrew training, and was produced in seven versions with various engine sizes from 210hp to 300hp, and design improvements over its years of production.

With the demise of the Victa aircraft production in Australia, the manufacturing and development rights, inclusive of the Victa Aircruiser, were sold to the New Zealand company Aero Engine Services Limited (AESL), who produced some 80 Airtourers in the 1970s.

RAAF Winjeels were up for replacement in the early 1970s and AESL set about the design of a replacement aircraft based on the Victa Aircruiser airframe, to be called the CT-4 Airtrainer. A great many design modifications were required to make a product that complied with the RAAF specifications.

Two prototypes were built, the first flying on February 23 1972 before AESL became New Zealand Aerospace Industries Ltd (NZAIL) in March 1973. Orders were received from the Royal Thai Air Force (RTAF), followed by the RAAF, the RNZAF and other minor players, although smaller recurring orders were raised by the three major customers over the years having the result of a stop and start production line. From July 1982 spasmodic production of the CT-4 was continued by the newly formed Pacific Aerospace Corporation until January 2005 by which time 153 of the aircraft had been produced.

The Museum's CT-4 was one of the 51 aircraft purchased by the RAAF. It was delivered to the RAAF in May 1975. It was sold at disposal in 1993, registered VH-CTU and moved to the RMIT's campus at Point Cook. It was moved later to the RMIT's Bundoora campus, became surplus to requirements and donated to the Museum in December 2019.
​
The Museum's CT-4 is currently under restoration.
back
© 2018 Australian Aircraft Restoration Group. All Rights Reserved.