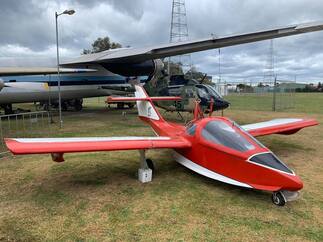 Click on image for larger version
The Periera Osprey was originally designed by George Pereira in 1969 as a single seat open cockpit homebuilt sport sea plane, powered by a single engine driving a pusher propeller.

​At the time, the US Navy was searching for a small light observation aircraft for use in Vietnam. After investigating the design, the Navy acquired one for testing which returned very good results. This program was cancelled with the end of the Vietnam war and no military variants of the Osprey were built.
Pereira began work on an improved version of the Osprey, the main changes being an enclosed two seat cockpit and amphibious capabilities with the ability to operate on both water and conventional runways.

The Museum's Osprey was locally built and donated in 2018.
back
© 2018 Australian Aircraft Restoration Group. All Rights Reserved.