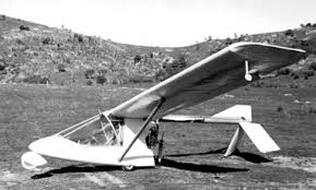 Click on image for larger version
The designer of this aircraft, Sanders Veenstra, was born in Holland in 1943 and arrived in Australia in his teens. His interest in aviation led to him training for a Private Pilot License which he obtained in the late 1960's. In the 1970's he became an early pioneer of the Ultra-Light Aircraft movement in the country. He owned several light aircraft and in the 1978 turned to the sourcing and importation of light aircraft for sale in Australia from the UK and Europe. With the proceeds from this enterprise his interest turned to his new aviation pursuit of Ultra-Light aircraft.

Between 1980 and 1985 he designed 14 different types, one of which was the Thermite and was produced and sold a total of around 30 aircraft.

Reverting to design and development rather than production, Veensta unfortunately died in March 1985 in the crash of one of his design prototypes that he was flying.

The Museum's Thermite is unique as it is an example of Australian aircraft design, and was also Veenstra's personal aircraft.
back
© 2018 Australian Aircraft Restoration Group. All Rights Reserved.