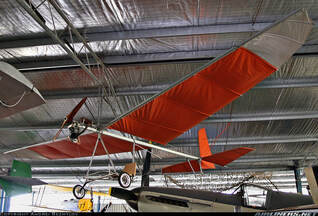 Click on image for larger version
The Skycraft Scout was an ultralight minimum aircraft designed by Ron Wheeler of New South Wales and first flew in May 1974. Following type certification by the Department of Transport, production by Skycraft Pty Ltd commenced in 1976.

A very basic minimum aircraft it is constructed with marine fittings and materials and it consists of an alloy tube fuselage, a 12hp engine attached to the front of the fuselage tube drives a propellor with a chain transmission, and the wings are Dacron sail cloth covered and removable. An 'A' frame beneath the wings supports the pilot seat and main undercarriage.

There are no ailerons, wing warping or rudder pedals. The only flight control is a control column which operates both the rudder and moving tailplane by applicable fore and aft and sideways movement.