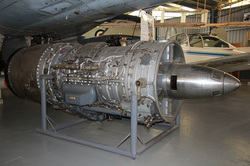 The SNECMA ATAR is a French axial-flow turbojet engine built by Snecma. It was loosely derived from the German World War II BMW 003 design, but extensively developed though a progression of more powerful models. The name is derived from its original design group,Atelier technique aéronautique de Rickenbach. The Atar powered many of the French post-war jet aircraft, including the Vautour,Étendard and Super Étendard, Super Mystère and several models of the Mirage.