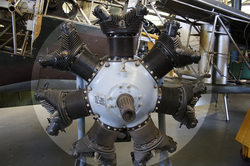 The Warner Scarab is an American seven-cylinder radial aircraft engine, that was manufactured by the Warner Aircraft Corporation of Detroit, Michigan in 1928 through to the early 1940s. In military service the engine was designated R-420.