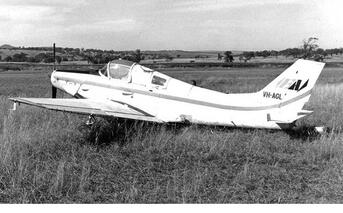 Click on image for larger version
Kingsford Smith Aviation Services of Bankstown Sydney undertook to convert the CA-6 Wackett Trainer into an agricultural crop duster/sprayer aircraft in the late 1950s. After the completion of five of of these conversions, the department of Civil Aviation (DCA) informed the company they would not approve any further agricultural aircraft with wooden glued wing structures.
A new company, Yeoman Aviation Pty Ltd was formed in August 1958 to develop the basic design into a modern agricultural aircraft designated YA-1, with metal wings and tail plane, powered with a Lycoming or Continental engine. The new wing was of the same dimensions of the Wackett's minus the slots and rounded wingtips. Extensive use was made of fibre glass including the engine cowls, lower fuselage, turtledecking, dorsal fin and with a 145 gallon fibre glass hopper. Stainless steel augmenter exhaust tubes became a distinctive feature of the new aircraft.
The first YA-1 was flown in January 1960 with a wooden tailplane, DCA being persuaded to allow the early YA-1s to enter service pending the subsequent building of a new metal tail plane and empenage section featuring a stabilator, swept fin and large rudder surface. DCA granted a Type Certificate for the new aircraft in June 1962.
Twenty Yeoman YA-1 Cropmasters were constructed at Bankstown from the early to mid 1960s and as production proceeded the use of Wackett parts was being reduced and replaced with new build-built components. By 1966, the only Wackett components still in use was the undercarriage structure which represented only 3% of the total airframe.
Despite high hopes of a New Zealand market for the YA-1 Yeoman Cropmaster opening failed when a conflict of interest arose with one franchisee, and a second franchisee who formed an associate company with Cropmaster Aircraft Pty Ltd, managed the importation of two aircraft only. In 1966 after the Australian Government failed to give tariff support against imported agricultural aircraft, an approach to move YA-1 production to the US did not succeed, which left the total production of the YA-1 Yeoman Cropmaster at the twenty built at Bankstown.
The Museum's Cropmaster is currently in storage