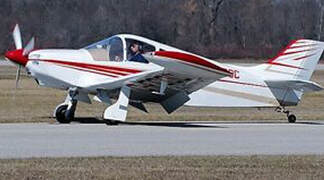 Click on image for larger version
The Cavalier was a new design based on the French homebuilt GY-20 Minicab designed by Yves Garden in 1949. The original plans were modified in the Canada by Stan McLeod and the first of several versions was re-named Cavalier SA102.5. Available in plan form for home building only, the Cavalier was a low cantilever wing monoplane of wooden construction, fabric covered with two seats side by side, landing flaps and tail wheel or tricycle undercarriage fixed or optional retractable, with further options of wing tip tanks and a third jump seat.

The Museum's Cavalier, an SA102.5, was donated in an incomplete stage of construction, and is currently on loan to the Hallam Secondary College in Melbourne.
​
It should be noted that plans for the SA102.5 are no longer available from the marketers.